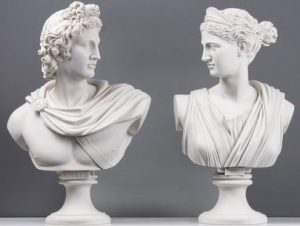 Plutarch is ideally suited for teaching Ancient History because he serves as an antidote to bad historical methods and introduces our students to so much more than history. I’ve outlined a few of the good fruits I’ve reaped since introducing Plutarch into my own classroom.

I ran across two older articles from Andrew Kern at the Circe Institute about teaching History. In these articles, he argues that history is primarily an inquiry and that we’re not trying to give our kids prophetic knowledge of the future or deep insight into the workings of human nature. While a disciplined study of history may provide flashes of inspiration, most of it requires more humility than judgment and should focus on compelling stories of humans making good decisions in difficult circumstances.

Plutarch’s biographies span the classical Greek and Roman period (roughly 8th through 1st cent BC), and are written from the perspective of the Roman political power (and with it, Greek culture) at its highest point. Thus Plutarch encourages comparison of the two cultures and peoples at the same time, since their glory days did not coincide but they lived as neighbors, rivals, and friends for over 1000 years. We often teach the Greeks first and then the Romans, which loses out on their cultural cross-pollination and coexistence in different parts of the Mediterranean World at the same time.

We also often act like the Greeks ceased to exist once the Romans took over, but, as Horace points out, the conquerors were conquered in a way here. After all, no Gaul ever wrote in Gallic (before or) after the Roman conquest. All the Gauls who ever wrote wrote in Latin. But Plutarch wrote in Greek and every educated Roman for 500 years knew both Latin and Greek.

Plutarch’s broad overview forces us to confront Greek and Roman culture at the same time. It helps us define what we mean by Greco-Roman and why we even put the hyphen in there in the first place. By focusing on mortals—ones who have a clear beginning, middle, and end—he also gives our students a framework for deeper study of the more detailed histories. It’s not always clear when a war began or ended, or exactly when we should consider Athenian democracy to have started, particularly with the revolutions and legal reforms happening throughout it’s 200-year span.

And finally Plutarch hones our historical tools by helping us selectively choose details. He enjoys laying out as many stories as he found plausible, but when he presents two conflicting stories it’s not because he believes both. He wants the reader to learn to judge.

Speaking of judging, Plutarch allows us the same courtesy when shedding light on other subjects. As a Platonist who believes in an ordered cosmos, he is willing to explore the rabbit-trails of architecture, astronomy, theology, and metaphysics. For him, they’re all under the providence of the same God who endowed us with the reason to know that He exists and is Good. Thus, with Plutarch, you can skim over the details that seem obscure or unimportant (excurses on where Apollo was actually born, or how meteors actually come from space) and focus only on the person he is introducing for the first read. On subsequent reads, though, you’ll find the depth of his knowledge profound and will always be rewarded in re-reading Plutarch.

Biography Begins the Quest for the Good life

He introduces our students to the genre of biography. Not only must they understand that a life is a unit, it’s the most important unit they’ve been given. What is it about the way they live and die that will say the most about them? What greatness can they be inspired to work for and achieve in their own lifetimes? Should we really limit them only to goals of wealth, ease, and entertainment or can we give them greater, and more difficult, goals worth acheiving: giving themselves to their family, community, and country.

In other words, we’re not just offering pictures of worldly success. Plutarch’s list of “failed” heroes is larger than you would think: Nicias and Agesilaus come to mind immediately but there are virtuous men who achieve much in their lifetimes and still fail on their primary or final quest. So rather than try to goad students into defining virtue and vice abstractly, Plutarch invites philosophy through anecdote and example. Is Alcibiades vain or proud? Why did Aristides earn the nickname the Just but not Pericles or Cimon? Is Themistocles a traitor or a patriot (particularly concerning his death)? Were Demosthenes and Cicero both weakest because they could only speak but not lead an army? What was Alexander’s greatest vice? Why does Camillus’s aristocratic pride not lead the same way Coriolanus’s had? The questions are endless and invite comparison not just with the Greek and Roman parallel, but within the lives themselves as many lives are contemporary or separated by a single generation.

This task of comparison requires understanding to precede judgment. If we press our students (and ourselves) hard enough to answer these questions, they force us to come to terms with why someone would have made that decision in those circumstances. We must in some small way learn to empathize before we can judge whether or not we’d do it ourselves. This moral reasoning strengthens our resolve to make good decisions in our own lives, since we’ve practiced the reflection necessary for prudential choices.

Brevity is the Soul of Selling it to Your Students

Plutarch’s biographical essays are the length of a long short story and most can be read in a week or two. In the K-12 classroom, we’re never going to get through all or even most of Herodotus, Thucydides, Xenophon, Arrian, Polybius, and Livy who are the major extant sources Plutarch pulls from (as well as many others who no longer exist). Plutarch allows us to receive the framework of almost all of these historians and more fruitfully study them for differences of emphasis and detail when we do go to the historians themselves.

The other warning we should take from Plutarch himself. He saw a “historic” mind as a defective one and puts it in range with a sophist. I’ll give the Greek and English for this quotation and then explain how I read it.

Finally, if there be need of any other instruction in regard to listening to a lecture, it is that it is necessary to keep in mind what has here been said, and to cultivate independent thinking along with our learning, so that we may acquire a habit of mind that is not sophistic or bent on acquiring mere information, but one that is deeply ingrained and philosophic, as we may do if we believe that right listening is the beginning of right living.

The words sophistic knowledge, glossed as “acquiring mere information”, contrasts sharply with philosophic knowledge, clarified as “deeply ingrained”. “Acquiring mere information” translates one Greek word, ἱστορικήν (historikēn). Biography chooses not to be bogged down in the details, so often the baneful memory of every mediocre history student. Rather, if we fill our students minds with living examples—actions, choices, councils, men, and heroes—whom they can know, understand, and even judge then biography introduces us to philosophy: the guide of life. All of our students will face similar decisions of increasing importance to themselves and others, why not give them a cast of characters to compare themselves to and keep that cast focused on the most noble and ignoble deeds of the past.

Moral Reasoning Must Begin Before Philosophy

Plutarch trains our students in moral judgments, even (and probably especially) when we don’t agree with Plutarch’s assessment of someone’s character. His multiple examples show the students that while virtue is one, the different circumstances and personalities in which it takes root means that it often looks different from age to age and place to place. In his essay on the virtues of women Plutarch reminds us that “Achilles was brave in one way and Ajax in another; and the wisdom of Odysseus was not like that of Nestor, nor was Cato a just man in exactly the same way as Agesilaus.”

So once we’ve introduced the vocabulary of virtue to our students, we should help them parse out why they respect one kind of bravery over another, or think one man displays greater justice than another.

The Distant Past is Generally Less Politicized

I teach close enough to the nation’s capital that too many of the conversations boil down to politics—in its flattened, modern sense—and so it’s refreshing to bring an ancient man before my students and encourage them to get to know him before judging him. This exercise helps them contextualize someone with different presuppositions and beliefs about human flourishing and still try to find the aspects of his life that live in conformity to a universal standard of human good.

So don’t shy away from Plutarch because he seems old, and don’t just prioritize the “primary sources” as greater than Plutarch. Find a good translation that will work for your students, proper to do a lot of reading aloud, narration, and discussion, and enjoy the fruits of introducing an excellent teacher into the classroom.

2 thoughts on “Plutarch as Antidote and Introduction”