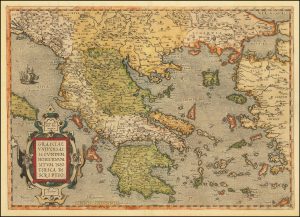 I intend to make this “Defining and Defending History” into a series where I study the primary-source historians for the Ancient World up to the Fall of the Republic. This inaugural post explores Herodotus’s explanation of History. The historians covered in later posts are:

Plutarch – The most famous biographer from antiquity compared the Greeks and Romans in 24 parallel biographies. I happen to have a podcast walking through them if you’d like to join me in reading Plutarch’s Lives.

I want to use the introductions that these men wrote to their works of history as a way of starting the conversation about what history is and why we ought to study it. The men who founded and expanded the genre often gave their own reasons for why they wrote and why we should read their history. Now we turn to Herodotus.

Herodotus: The Father of History

Herodotus, the father of history, started a number of trends in history. Not only did he name the genre with his word choice, but he was also likely writing in exile from his homeland of Halicarnassus. Many artists and writers of later decades would also be writing from exile—Thucydides, Xenophon, Polybius, Ovid, and Dante to name a few. Herodotus, though, writes in a continuing stream developing from Homer and Hesiod as much as anyone. Certainly, he is writing in prose, but his “inquiry” doesn’t often strike the reader as discerning a narrative of events, battles, people, and places. Rather, it often reads like an “inquiry” into just about everything: the flora and fauna of the Nile, an extended treatise on Egyptian customs, and another extended look at the nomadic Scythians, in addition to the typical Greek and Persian people, stories, and battles. The final thing that strikes me about Herodotus as a source is that he doesn’t think what he is doing needs much defense. Here is all he gives as a preface:

And my translation, attempting to be as literal as possible to point out important words:

This is the display of the inquiry of Herodotus of Hallicarnassus, in order that the deeds of men not be forgotten (literally, “become gone out”) in time, nor that the great and marvelous deeds, both those displayed by Greeks and those displayed by barbarians, lose their glory (literally, “become glory-less”), and, among other things, in order that (this display may show) the reason for which they (Greeks and Persians) fought each other.

So, what is translated up there as “researches” is a singular noun (ἱστορίης – historiēs) which comes from the verb “to inquire, ask of” and the root of this word is the verb for “to know.” Herodotus is just presenting what happened. He says on several occasions that he is “saying what has been said” and makes clear that he himself does not give credence to all of it (II.123; VII. 152). His inquiry seems less discerning to the modern reader than it should be.
The next important word in this introduction is remembering, though in the original Greek he defines it negatively. He is writing so that the great and marvelous (μεγάλα τε καὶ θωμαστά) deeds do not go away (ἐξίτηλα) or lose their glory (ἀκλεᾶ). Additionally, he writes so that the cause (αἰτίην) of the war between the Greeks and the Persians (βαρβάροισι) may be better understood. This sets up a theme for his history and ties him into his predecessors.
First, he has chosen a war of West versus East, as Homer did. Second, κλέος, glory, is an important word in Homer and Herodotus explicitly writes to preserve κλέος for those deeds, whether of Greek or barbarian, that deserve to be so remembered. Finally, he does so for the sake of memory. Much of Greece was still not literate and hand-copying manuscripts was expensive and laborious, so he would have performed this work itinerantly, much as the wandering bards would memorize and perform Homer. This brings about the importance of memory. It’s not just something he himself would commit to memory and share with others, but in so doing he would be adding to the collective memory of all the Greeks. There is something essentially historical about what we remember and how we piece it back together.
And finally, he is searching for causes and effects. He wants to know what motivates men, what moves armies, and what won this war. It’s pretty safe to say that, while he respects certain Persian ideas, customs, or men, he ultimately argues that Greeks won because they fought freely in defense of their homeland, and Persians lost because they were driven by the hubris of an autocrat fighting to expand their already expansive empire. Here we see echoes especially of Aeschylus, whose Persians can be profitably studied alongside the Histories.