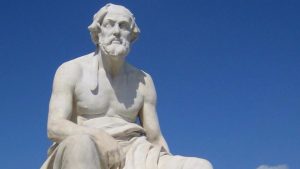 This is the third part of a series of posts I’m doing where we see the earliest Greek and Roman historians defend and define why they wrote history. The historians covered in these posts are:

I want to use the introductions that these men wrote to their works of history as a way of starting the conversation about what history is and why we ought to study it. The men who founded and expanded the genre often gave their own reasons for why they wrote and why we should read their history. Now we turn to Polybius.

At least that’s the title one of my history teachers used. Thucydides is a strange follow-up to Herodotus, even though the men’s careers likely overlapped. Herodotus reports heavily on Scythians, Egyptians, and Persians; Thucydides focuses solely on the Greeks. Herodotus quotes over 80 oracles in his Histories; Thucydides famously quipped when an oracle correctly predicted the length of the war that “faith in oracles [was] for once being justified by the events” (5.26). The Father of History bounced back and forth through time to cover the development of certain races or customs, important myths, or even just ridiculous stories (Hippocleides doesn’t care, anyone?). Thucydides, not graced with such a title, meticulously documents the war’s annual winter and summer campaigns and off-seasons. So, how does Thucydides explain what he’s doing? How different is he from Herodotus?

The translation is from the public domain version available on Perseus. This 1910 translation does a good job capturing the complexity of Thucydides’s prose, so fair warning that he writes more thickly than Herodotus.

Thucydides, an Athenian, wrote [the history of] the war between the Peloponnesians and the Athenians, beginning at the moment that it broke out, and believing that it would be a great war and more worthy of relation than any that had preceded it. This belief was not without its grounds. The preparations of both the combatants were in every department in the last state of perfection, and he could see the rest of the Hellenic race taking sides in the quarrel; those who delayed doing so at once having it in contemplation. Indeed, this was the greatest movement yet known in history, not only of the Hellenes but of a large part of the barbarian world—I had almost said of mankind. For though the events of remote antiquity, and even those that more immediately preceded the war, could not from lapse of time be clearly ascertained, yet the evidences which an inquiry carried as far back as was practicable leads me to trust, all point to the conclusion that there was nothing on a great scale, either in war or in other matters.

I highlighted some words I’d like to draw your attention to. First, dear reader, notice that Herodotus published a “display of the inquiry” and Thucydides “writes the war.” His scope is already far narrower than Herodotus’s was; Thucydides seems to define history as military history, though he obviously includes much more than military actions in his 8 books, recording over 100 speeches. So, Thucydides seems to define his history as one that will focus on the causes and effects of the Peloponnesian Wars. Did you catch the slight rebuttal of Herodotus in the “greater and more worthy to be told than any (war) that has preceded it.”? Either Herodotus was unlucky, or Thucydides had a better judgment as to what was great and worthy to be recorded. I leave it for my readers to decide.
Another word shows up twice in Thucydides’s proem that doesn’t show up in Herodotus’s—evidence. Right after Thucydides has given his opinion (using a verb of believing—ἐλπίσας), he provides evidence (τεκμαιρόμενος). This evidence really sets Thucydides apart from Herodotus, who was more obviously telling his reader what he had heard and leaving it up to the reader. A great number of sentences in Herodotus start with clauses like, “The Persians say…” or “The Athenians say…” and don’t provide much more context than that. Thucydides—and this is why my history teacher gave him the title of the historian’s historian—seeks evidence.
This word was used in Homer to denote a finish-line or demarcation wherein you can easily perceive a winner. During Thucydides’s own time, Lysias, the famous Attic Orator, used it to mean proof in court. Socrates himself uses it before giving proof in the Apology and the Crito. As I tell my students, it is no accident that the same culture that developed trial by jury also developed historical methods that required proof for the assertions of cause and effect. Thucydides inquires—though he uses a different verb than Herodotus—he uses the verb which comes down to us in the English word skeptic. Thucydides does not just inquire and report; rather, he weighs the evidences (plural!) that he receives and pieces together the most accurate narrative he can.

That may have been Thucydides’s first and most important paragraph, but his introduction is really a cursory history from the Trojan War up to the present day, just to bring his read up to speed, you know? He drops a few more nuggets in there that are worth examining, and tweeting if we have the space. As we’ve already established, he dislikes those who bend the truth, but he clarifies here:

Which I can translate as:

People hearing traditions, even their own country’s traditions, is to receive them all the same, uncritically.

Fun fact, the first definition of ἀβασανίστως is “untortured,” but you get the idea. Don’t receive your traditions in an un-tested way! Α βάσανος was a touchstone, used to ensure that gold was the real thing. This sounds like St. Paul in 1 Thessalonians 5:21 “Test all things, hold fast to what is good.” Unfortunately, though writing in the same language, Paul doesn’t use the same verb here. He even ends that paragraph with a rebuke along similar lines:

For which the 1910 translation renders:

So little pains do the vulgar take in the investigation of truth, accepting readily the first story that comes to hand.

There’s got to be a name for this human trait—like confirmation bias or some such—where we often believe the first thing we hear that seems to work, or even just the first thing we hear! Social media is particularly rife with this and a story will often have been re-tweeted 10,000 times before we realize it’s a hoax. Snopes exists for this reason alone!

Next, though, Thucydides defends his “Greek History from Homer to Me in 3 pages or less” with the following:

On the whole, however, the conclusions I have drawn from the proofs quoted may, I believe, safely be relied on. Assuredly they will not be disturbed either by the lays of a poet displaying the exaggeration of his craft, or by the compositions of the chroniclers that are attractive at truth’s expense; the subjects they treat of being out of the reach of evidence, and time having robbed most of them of historical value by enthroning them in the region of legend. Turning from these, we can rest satisfied with having proceeded upon the clearest data, and having arrived at conclusions as exact as can be expected in matters of such antiquity.

Thucydides recognizes that he is not the first to do this; he is, however, asserting that he is doing it in the best way. Sure, Homer has already displayed his exaggeration by taking subjects from the misty legends of the past and making them beautiful (but not true). Sure, Hecataeus and Herodotus have “chronicled” some events of the past, but at the expense of truth! Thucydides sounds like some modern data scientist crunching infographics, sometimes!

He continues and tells his reader “If you think it’s hard to read, just imagine how hard it was for me to write!”

Again from the 1910 English translation:

And with reference to the narrative of events, far from permitting myself to derive it from the first source that came to hand, I did not even trust my own impressions, but it rests partly on what I saw myself, partly on what others saw for me, the accuracy of the report being always tried by the most severe and detailed tests possible. My conclusions have cost me some labor from the want of coincidence between accounts of the same occurrences by different eye-witnesses, arising sometimes from imperfect memory, sometimes from undue partiality for one side or the other. The absence of romance in my history will, I fear, detract somewhat from its interest; but if it be judged useful by those inquirers who desire an exact knowledge of the past as an aid to the interpretation of the future, which in the course of human things must resemble if it does not reflect it, I shall be content. In fine, I have written my work, not as an essay which is to win the applause of the moment, but as a possession for all time.

That last sentence, though. So good. I’m going to tweet it just for the irony of the fact that my tweet will make an impression for .000003 seconds on all two of my followers (thanks, Mom!), and yet Thucydides has really succeeded. His work has come down to us in the, sadly unfinished, state he left it, and we have studied it ever since. Romance, by the way, is the translation of the word μυθῶδες. Yes, you are seeing the root of our word myths in there! Some day when I have time to look at Plato more closely, we should examine on this blog Plato’s distinction between logos and mythos. Someday…

Thanks for hanging in there, dear reader. I’m glad at least a large portion of those words belonged to Thucydides, and I thank you for helping me flesh out my thoughts before I lecture on this next year. Feel free to leave a comment and keep the conversation going, or give me feedback so I can keep the content relevant and interesting (to the kind of people that already find Thucydides in the original relevant and interesting). Pax et Bonum!