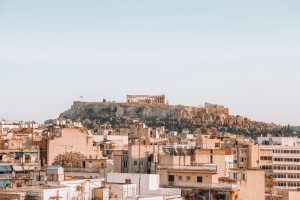 This is the third part of a series of posts I’m doing where we see the earliest Greek and Roman historians defend and define why they wrote history. The historians covered in these posts are:

I want to use the introductions that these men wrote to their works of history as a way of starting the conversation about what history is and why we ought to study it. The men who founded and expanded the genre often gave their own reasons for why they wrote and why we should read their history. Now we turn to Polybius.

So, Polybius starts his history in a sneaky way, by telling us what others have already said and what he’s not going to say—but he says it anyway! Ah, this rhetorical device is called praeteritio and was a favorite of Cicero’s (most famously used in the first Catiline speech that almost every 3rd-year-Latin student reads). I’m not going to call my opponent and liar and thief, because that would be rude. The audience is nevertheless still impressed in some small way by the fact that you almost called your opponent a liar and a thief, and could introduce those terms obliquely which could have made you look rude or calloused if used directly.

Polybius uses praeteritio in a different way, though. He tells us that every historian up to this point has defended history (as we know from the scant extant sources, he is correct) and done so better than he will. Nevertheless, he goes on to defend it in three ways:

With regard to the first point, it seems that this applies not only to nations but to people. Why do Christians examine their consciences and strive for improvement daily? Why do bosses have quarterly or annual reviews of employees? For that matter, why do students have report cards? These all seem to hinge on the fact that we, as humans, need to remind ourselves of past conduct, review it, judge it, and strive to improve upon it.

The second point I’ll pick up further down. Moreso than Thucydides and Herodotus before him, Polybius had plenty of military and political experience and formulated (and shared) intriguing theories about political systems. A great deal of our knowledge of the Roman Constitution during the Republic (not a physical document but the makeup of the Roman Government) is actually from Polybius’s History.

The final point strikes me as so philosophical. What a Stoic you sound like, Polybius! He could have been acquainted with Panaetius, a Stoic philosopher who was friends with Scipio Aemilianus. These facts are interesting because Scipio was a hero of Cicero’s (appearing in, or being mentioned in a number of Cicero’s philosophical dialogues) and Cicero consciously modeled his De Officiīs on Panaetius’s work of the same title (but in Greek).

Here it is in Greek:

Had previous chroniclers neglected to speak in praise of History in general, it might perhaps have been necessary for me to recommend everyone to choose for study and welcome such treatises as the present, since men have no more ready corrective of conduct than knowledge of the past. But all historians, one may say without exception, and in no half-hearted manner, but making this the beginning and end of their labour, have impressed on us that the soundest education and training for a life of active politics is the study of History and that surest and indeed the only method of learning how to bear bravely the vicissitudes of fortune, is to recall the calamities of others. Evidently therefore no one, and least of all myself, would think it his duty at this day to repeat what has been so well and so often said. For the very element of unexpectedness in the events I have chosen as my theme will be sufficient to challenge and incite everyone, young and old alike, to peruse my systematic history.

Polybius held several high positions in the Achaean League, at times directly resisting and at times staying out of the way of Roman expansion. As such, as you can imagine, he distrusted Rome and longed to keep the city-states free. When the Achaean League finally lost completely to Rome, Polybius was one of 1,000 hostages moved to Rome so that they wouldn’t continue to plot against the Romans.

Polybius befriended Scipio Aemilianus (as mentioned earlier), the grandson of Scipio Africanus, the hero of the Second Punic War. This really was the first major influx of Greek knowledge and culture into the Roman ranks, but the influence didn’t exclusively flow in one direction. Polybius began to admire the greatness of Rome, asking the rhetorical questions:

For who is so worthless or indolent as not to wish to know by what means and under what system of polity the Romans in less than fifty-three years have succeeded in subjecting nearly the whole inhabited world to their sole government — a thing unique in history? Or who again is there so passionately devoted to other spectacles or studies as to regard anything as of greater moment than the acquisition of this knowledge?

So, what is so great about this fifty-three year period of history? Well, in that span of time Rome goes from being in control of the Italian peninsula to controlling (almost) the entire Eastern and Western Mediterranean. In the same year, 146 B.C., her soldiers burn Carthage and Corinth to the ground as a symbol of complete subjugation (sub-jugum = under the yoke). The Punic Wars are just the beginning. Rome fought the Greeks and sundry peoples in Asia Minor throughout this period and consolidated the broken mess of Alexander the Great’s heirs. It’s pretty awesome. Seriously, read it.

Polybius didn’t lie in his introduction that he wanted to prepare his readers for political life. He spends the entirety of Book VI examining the setup and advantages of the Roman Republican government and military. In sum (you should go read Book VI, if not all of Polybius after my friendly introduction), Rome’s greatest strength lay in the combination of the pure forms of government:

He isn’t as thorough as Aristotle is in Book II of the Politics, and he uses different terms than Aristotle, but that will have to be the topic of another post. For now, we have laid bare the reasons Polybius has for writing history. Are they good enough reasons to make you read him? I hope so.