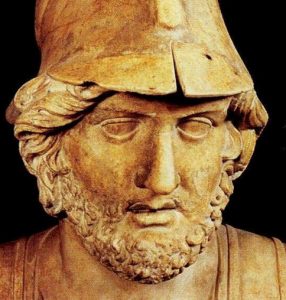 Themistocles saved Athens in its darkest hour, yet he dies in the Persian empire, the inveterate enemy of Athens. Is Themistocles a patriot or a traitor?

6. False, his parents did not disinherit him or die of grief at his youthful failings; some say his father pointed to old triremes abandoned on the shore and discourage his son from politics showing what the polis did to old ship was the same it did for old politicians.

C. 12 – Tricking the Persians…and the Greeks

C. 27 – Themistocles Before the Vizier

C. 28 – Themistocles Before the King

C. 30 – Themistocles Saved by a Dream