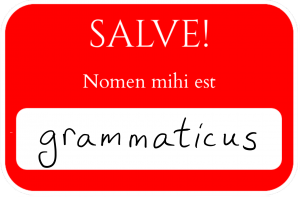 As we look forward to a new school year, I wanted to share a practice I started using last year that I’ll be continuing as long as I teach Latin to large groups of students. I encouraged each of my students to pick a Latin name. This allows me to practice some easy grammar off the bat and acts as an ice-breaker in the first week.

The Romans had three names and most of our students walk in the door with three names. For the Romans, the three names came to be associated with citizenship over time. People with just one name—slaves, women, foreigners—easily stood out as non-citizens.

Generally, just like our names, close friends and family-members would use your praenomen, or first name. Everyone else used your nomen, or nomen gentilicium, which placed you in the context of the larger Roman families called gentes. Yes, that’s the etymology of gentiles, but that’s a different story. Your cognomen distinguished what branch of the gens you belonged to.

So every son of Marcus Tullius Cicero would’ve been a Tullius (gens) Cicero (branch), and the oldest would’ve been stuck with Marcus. Cicero’s daughter took the feminine form of the nomen, Tullia. This is why Gaius Julius Caesar’s daughter was named Julia. I show my students some common names of famous Romans and break them down.

Common Roman Names of the First Century BC: the bolded name helps you recognize the person.

You can see that shouting out “Marce!” in the Forum would’ve made at least three famous men turn around. It would also be impolite to be so forward. Thus, the praenomen belonged only in the family, where there would be just one or two Marcuses running around. The name Tullius also becomes Tullī when you’re talking to him. Anyone reading older British Literature may notice that a well-educated Brit gives himself permission to use Cicero’s nomen when they call him “Tully.”

Nomen Habet Omen – The Name Has the Omen

There’s an early Roman comedy where a man gives advice on buying a slave merely because of her name: Profits. The man says:

The name and the omen are worth any price.

So, the Romans would sometimes say “Nomen habet omen” the name has the omen. This could be flummoxing since Cicero means “chickpea.” Cato, according to Plutarch, derives from a less-common Latin adjective for wise. Bibulus, a common cognomen, means drunkard. Balbus, stutterer. Calvus, bald. Strabo, squinty. And it goes on and on from there. If the Romans really believed their axiom, most people’s omens were unflattering at best!

In my own classroom, though, this lesson forces my students to think about the meanings behind nouns that have lost meaning, as commonly happens with names. Some of my students know the meanings of their first names, few have a clear idea of what their last name means (except the Smiths or Barbers of the world). Latin makes this connection directly because it still uses the same word for noun as it does for name, nomen.

One reason to allow the students to choose their own names is to encourage them to take ownership over their Latin learning. In my case, almost none of my students would voluntarily choose to study Latin, so I have a lot of convincing to do in the first month to show them it’s worth giving it a year-long shot before they dismiss Latin as useless, boring, or difficult. The names they seek will often have an equivalence to their own names. I end up telling them what their names mean, and then they hunt for some equivalent, if possible, in Latin. If not, they go with a favorite animal or something that just sounds cool to them. They connect with the Latin version of themselves because they choose it themselves.

Speaking of sounding cool, this is the opportunity to force practice of the pronunciation you choose in your Latin class. If it’s Ecclesial, you’ll hear Victor and Viviana similarly to the way we say them in English. If it’s Classical, you may have some raised eyebrows for names like Valens, Caepio, or Germanicus.

In addition to pronunciation practice, it allows us to have a conversation about case usage right away, since all the masculine nouns have to be changed when the students are directly addressing each other. Yet, when they are the subject of the sentence in their own name, they look normal. An example:

Grammaticus is the subject and thus ends in -us.

Teacher, what are we going to talk about today? There, I’m being talked to, and the ending changes. The rule is pretty simple, so I can introduce it on day one:

Look at the Nominative ending (basic form of the noun). If it ends in anything other than -us, -ius, or -eus it remains unchanged. So, whether I’m talking to Sylvia or about Sylvia (as the subject of the sentence), she’ll always be Sylvia in the Nominative and Vocative cases. If I’m talking about Horatius as the subject, his ending stays as is. When I talk to him, though, I call him Horatī. Here’s a simple chart to help your students remember:

The final benefit is that it gets my students out of their chairs practicing one of the best ways to learn something: asking questions. Yes, it is a forced situation similar to any language phrasebook where they’re primarily memorizing what to say and regurgitating it. But it gives them some confidence with a few Latin words and allows them to hear them speaking it in their own voices from day one.

Using the Nomen throughout the Year

So, I keep a roster on me at all times with their English and Latin names so that I have a key. Another thing I make is a “randomizer,” an idea I stole from a college professor of mine. In college, he caught on to the fact that some students would sit in a certain place around the table because they had estimated where the class would be in the translation and that was as far as they had prepared. To force us all to prepare the entire passage every night, he put our names on 3 x 5 cards and would randomly select the order of translators. I appreciated this because it meant almost all of us put in more work to make the class go better.

For my randomizer, the Latin name goes on one side (with the nomen in the biggest letters) and the English name is on the reverse. When I pull the card, everyone sees and hears the Latin name. This keeps the focus on the Latin name throughout the year and encourages the students to use each other’s Latin, rather than English, names.

I do the same with my students and keep track of the frequency with which they are called and the quality of their responses throughout the quarter. This makes it into their grade in the form of class participation. If anyone volunteers a correction or an answer, he automatically scores a point for himself for the day.

So, I randomoniously—that a portmanteau word of randomly and ceremoniously—select a few students each day. In any class smaller than 20, it almost guarantees everyone is called on every few days or every week. The system became unwieldy last year in a classroom of 27, so I adapted it where my students all took the quiz at the same time, but then I worked with the one half of the class first, in a separate set of notecards, and then the other half. This means that the statistical likelihood of any student being chosen in the smaller groups doubled, so many more students were called on each week.

Try Latin Names In Your Classroom

I made up a handout which I’ve used for two years now. I hand-selected names from larger lists at Wikipedia (cognomina) and a place called NovaRoma (praenomina and nomina). Any names that might sound “funny” in English or would otherwise distract the class didn’t make the cut. You’re welcome. 🙂 Feel free to copy it and use it with your students and let me know how it goes. Thanks!

Click here to open the .pdf and save it to your computer or phone.