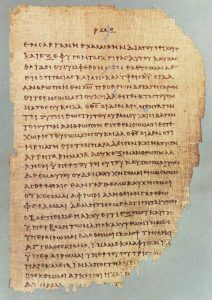 Do you know someone graduating from high school, college, or seminary? Finishing a degree in Classics? Do you want to use your knowledge of Ancient Greek to read scripture every day? One of the best gifts to get someone (or yourself) who fits this description is a hard-copy text of the New Testament.

Though I teach Attic Greek at my school, I always tell my students that the greatest lifelong habit they can put in place now is not only to read some of the New Testament (start with the gospels) every day, but to read it in as many languages as you know. When that language is Greek, you’re able to read the original New Testament every day until you die. What a wonderful gift from a single high-school class.

While you can always pull it up on your phone, and the digital resources for parsing sacred texts grow stronger every year, nothing can replace that awesome technology—now going on 1600+ years old—that we call the book. We all know the advantages of the book book over the book-on-the-phone.

Thankfully, the options have increased for someone wanting a beautiful version of the New Testament for devotional and academic use. I’ll review the options below from best to worst, noting price as I go. Links are affiliate, so I may benefit if you use the links from this site, but it will not increase your costs.

Yes, this is a small category. There’s really only one contender. the German Bible Society has done a great job producing a book that looks good and will last a lifetime. This one also has the most robust apparatus criticus and indices, making it most useful for a scholar who will continue working in an academic setting. The best feature of this, though, is that it places the Greek and Latin in legible type-face on facing pages.

Most students who study one of the languages often study the other and because the languages cross-pollinated for five or six centuries (at least), the vocabulary and idioms had a profound impact on one another. In general, if you know one language better than the other, this text can help you improve your reading fluency in both. I always find myself marveling at Jerome’s translation. With both languages visible, I can watch him adhere faithfully to word order as often as he can. Or I can see when he adds Latin words and phrases for clarity (most commonly substituting a whole relative clause where Greek uses just a participle, for example).

In this category, we have two hardcover options now and so you may want to consult an article going over the differences between the German Bible Society edition of the Greek (also called the Nestle-Aland 28, or whatever edition number they’re on by the time you’re reading this) and the Cambridge Edition published by Tyndale. If you’ve never heard of the differences, check out this article (particularly number 3) for an overview and here for a deeper dive as to how Cambridge differs from the NA-28.

Enough parallels! No Latin and no English. This Nestle-Aland edition takes the same Greek edition from above and puts it between blue hard-covers with the same apparatus criticus.

Your other options include the UBS edition, which has a simple interface and thus is easier to read without all the apparatus getting in the way. While you may be tempted to get the UBS edition because it’s cheaper, I still prefer the font-face, spacing, and pages of the NA28 and see it as a superior text worth the extra $20. I had a UBS when I studied Galatians in college and rarely read it because it’s font face I found ugly and the line-height too cramped.

In the final category is the Greek New Testament for those still building their Greek muscle, and aware that with a parallel English translation they would just choose to ignore the Greek altogether. These reader’s New Testaments are perfect for a student who only got two or three years of Greek study in the classroom, and thus doesn’t feel confident to tackle any page of the New Testament on her own.

The most beautiful of these editions has the best paper, the highest quality cover, and a ribbon for marking pages. Unfortunately, it seems to be rapidly falling out of print and thus the price keeps rising. Be sure to check Thrift Books as well as Amazon, though I’m not sure many people get rid of these after buying them.

The runner-up, almost as beautiful and having made important improvements since the ugly second edition, is the faux-leather-bound Reader’s Greek New Testament from Zondervan. This is the version I issue to second-year Greek students in my high school program. It’s inexpensive enough that we can buy classroom copies for the students to keep, and it’s useful enough that they can bring it to the midterm and final. The third edition sees improvements in font-face, maps, and a thorough lexicon in the back. It’s also the lightest and thinnest of all the editions here, and if the student keeps its hard-box cover, it won’t deteriorate in a backpack or locker.

And finally, there’s the newcomer from 2020, the Cambridge Edition from above (but without the parallel English), which comes in a journaling version and a single volume. One thing to note here is that the order of the books will be slightly bewildering, placing the Catholic Epistles before the Pauline Epistles. A major advantage of this New Testament is that’s it’s a true hardcover. Some of the texts listed above are hardcovers that feel like the rigid, thing cardboard of a mailing envelope. This is the real hardcover you expect when you hear the word, and thus could last a lot longer.

So, you may be thinking, “Hey, the Old Testament was translated into Greek too, you know!” I do know, and recently more options have been published that allow for great reading away from a screen. I don’t recommend starting with the Old Testament because it’s vocabulary is far larger, the topics it covers are more complex (prophecy is harder to read than St. Paul, and everything is harder than the Gospels which you’re already familiar with), and the text itself doesn’t often fit into one volume.

A Septuagint with no help for the beginning reader is the single-volume Septuaginta. Your Greek should be pretty strong or you should have a lexicon handy. The inside of this has just the Greek and an apparatus criticus at the bottom. The font is smaller than the Greek New Testaments listed above, and the verse numbers are moved out to the margin to make more space for the Greek text. The size and weight of this text, though, makes it about as portable as an entire Old Testament can be. It’s roughly 6″ x 8″ and about 3″ thick (Amazon disagrees with me, but I measured my physical copy).

For much more money, there’s a large-print version of this but I can’t really speak to it because I don’t have it in front of me.

Two Volume Septuagint for the Desk

A bulkier, but more helpful, two-volume edition would likely stay parked on a desk. The two-volume Reader’s Septuaginta is about $80 at the time of writing. For vocabulary, though, this is self-contained, either defining the less common words in a footnote on the same page or indexing the more common words in a lexicon at the back. It also tries to tie important vocabulary into how it’s used in the New Testament.