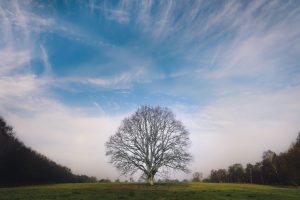 Quid est veritas? Pilate asks Christ. In many ways, it’s what secular postmoderns ask Christians. Shaking off the prideful, “Knowledge is power” of modernism, the po-mos (pronounced: “poh-mohs”) are right in some ways to question that axiom. The answer is not, however, to assert that truth is entirely unknowable and impossible.

Etymology can lend a hand here in examining the ways that different cultures, including ours, have come up with the word for truth. I’ll start with English and work my way back into Latin and Greek.

In English, the word “truth” has a few cousins like troth, betroth, and tree. Wait, did I just write tree? Yes, that’s right. Truth is originally a Mercian (Anglo-Saxon dialect) word treow with the common suffix –itha (commonly seen in words like breadth, height, etc…). The Anglo-Saxon word was treowth which came into our English for truth. This word has cousins across the Germanic languages and most of the words refer to trees (see this entry in the Online Etymology Dictionary). But the basic Proto-Indo-European root means “wood, tree” or more basically it even means “firm, solid, steadfast.” So, the English speaking peoples have always considered truth to be something firm or solid. As a matter of fact, the ancient pagan religion of the island of Britain was called Druidism. There’s that root again—dru this time with wid (we get the modern word wit from this root)—and it literally means “to know a tree.” After all, that’s what the Druids did best, they knew trees. So, in a culture that relied so much on trees that they literally worshipped them, it makes sense that the words tree and truth are related.

It is also striking that this culture found so compelling the story of Christianity, wherein the Savior of the Universe is sacrificed on a tree. There’s a great old Anglo-Saxon poem, best read around the time of Lent, called “The Dream of the Rood” where the wood on which Christ was crucified tells its own story. Trees and Truth… interesting beginnings!

And now on to Latin. Veritas is what Pilate asks for. This comes from the adjective verus which gave us the adverb very. It is interesting that its opposite words have to do with speaking (falsus) or making (fictus). Falsus has a common Indo-European root meaning “to say.” We get English words like profess and confess from this same root. Not everything “they say” is true, now, is it? Fictus gives us words like fiction and fictive, so we can see that not even everything that’s written (even on the Internet! *gasp*) is true. No, for the Roman, truth was something to be assented to—its common root is choice or belief, and it has cousins as far flung as Sanskrit.

The Greek Perspective of Truth

And before we forget, let’s see what Greek has to say about truth. Christ himself says Ἐγω εἰμι ἡ ὁδὸς, καὶ ἡ ἀλήθεια, καὶ ἡ ζωή. That alpha at the front of the word ἀλήθεια is called by linguists the “alpha-privative” and it negates the meaning of whatever word it is put in front of. Is that river crossable (διαβατος)? No, OK, we’ll call it ἀδιάβατος. So, some of my readers may recognize the word λήθεια as sounding a lot like one of those rivers in the Underworld, the river Lethe caused forgetfulness when heroes drank therefrom. Truth, then, for the Greeks is a matter of remembering or uncovering. Interesting that the same culture that invented so many new lines of inquiry—science, philosophy, politics, geometry, and even advanced the fields in medicine astronomy—saw truth as something to be uncovered or remembered. I say this leads to two kinds of truths—truths that we must uncover for ourselves (heretofore unknown like the planet Pluto before 1922) and truths that we must remember (culturally pass down through our families and other systems of education).

And so, I encourage post-moderns to seek the truth once more—reach for it, remember it, recover it, and ultimately rely on it. The Word is packed with so much meaning.