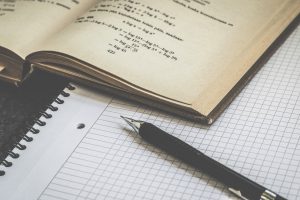 This summer I’m a student again! I’m learning Math in the classroom for the first time in decades. I’m finding, though, that returning to Math as an adult has been unexpectedly more fun than I would’ve imagined.  The rest of my Summer 2016 is best captured in bullet-points:

There it is. On paper it doesn’t look too bad, but it’s keeping me pretty busy this summer. Good thing I don’t multitask as much as I used to!

And this post is not to complain! I’m really enjoying being a student again. We come across three words in my Greek class every year that I tend to emphasize because they tell us a great deal about the role of education in Western Civilization. They are the verb to learn (μανθάνω), the verb to educate (παιδεύω), and the verb to play (παίζω).

It is no accident that we call Math math, since a great deal of what we do was codified and collected for us by the Greeks. Euclid’s textbook, The Elements has been in non-stop use for 2300 years! Aristotle’s Physics asked and answered some basic questions about Infinity (important to both Math and Science). Archimedes’ engineering prowess allowed his besieged city of Syracuse to fight back for two years, all while adding to our knowledge of hydrostatics, weights & measures, levers, and even an attempt to explain how many grains of sand would fit in the entire universe (which, he assumes, is finite)!

And I point out two things to my students when we talk about the verb to learn. They are μαθηταί in my classroom, coming directly from the verb “to learn.” One of the earliest uses of this word to describe students was in the school of Pythagoras (who precedes almost all the other famous Greeks you can name (except Homer)—Socrates, Plato, Aristotle, all the dramatists, all the major mathematicians, etc.). Pythagoras was a bit of a mystic—numbers held a religious and powerful significance to him. There is a (almost certainly apocryphal) story handed down that the Pythagoreans were so serious about their numbers that when one of their members discovered irrational numbers—numbers that cannot be expressed in a finite ratio, but go on forever like π or e)—he was murdered before he had spread his poisonous knowledge too far. So, in this cult of Number, Pythagoras made the distinction between two kinds of students—μαθηματικοί (learners) and ἀκουσματικοί (hearers). It reminds me of the Letter from James 1:22  “ Γίνεσθε δὲ ποιηταὶ λόγου καὶ μὴ ἀκροαταὶ μόνον παραλογιζόμενοι ἑαυτούς” (Be ye doers of the word and not [only] hearers, deceiving yourselves). Those who were understanding Pythagoras were more than just his hearers, they were the Mathematicians! There is an element of action and understanding—straining even—in the task of the learner.

I’m once again in the midst of the same endeavor, striving to parse out a Euclidean proof or Descartes’s approach to Math, Science, and Philosophy. It’s honestly such a delight, but I hope too that it fuels no only excitement back in my classroom, but also a greater empathy for the plight of the student.
The second thing I often remind my students of is that a (rather late) tradition hands down to us that Plato’s had inscribed over the entrance to his Academy, “Let no one ignorant of geometry enter here” (ἀγεωμέτρητος μηδεὶς εἰσίτω μου τὴν στηγὴν). The first word has an alpha-privative, that is, an alpha at the beginning which reverses the meaning of the adjective (think a-theist), so it isn’t necessarily someone ignorant of geometry as much as it would be someone uninterested in what geometry has to show him about Truth. Socrates famously uses geometry in the Meno to introduce the question as to whether there is Truth in other categories of life—particularly in the category of virtue. After teaching Meno’s slave-boy to double the square in pretty short order, he asks Meno if virtue can be taught in this way. This was the first dialogue we read this year.

It’s also important to emphasize that I’m so excited to read for school and show up in class ready to discuss the ideas and arguments of these foundational mathematicians and scientists. This brings in another element of learning—delight. This is something that mandatory education will always struggle with. As long as everyone has to do it, part of the human spirit revolts against whatever we are coerced into doing. So, I believe it is one of the teacher’s important jobs to help find the fun (and snap! the job’s a game, as Mary Poppins says). Ok, without getting too Julie Andrews on you, I still believe it’s an important point that students need to be engaged and delight in the work they’re doing. Perhaps not 100% of the time, but consistently enough that the whole project doesn’t just feel like drudgery for them.

The Greeks saw this as well. Their noun for child (male or female) is παῖς, παιδός (the Nominative and Genitive forms, respectively). From it, they form the verbs to educate (παιδεύω) and to play (παίζω). Some may argue that the similarity simply occurs because they’re both actions done to children—rearing and playing are things adult Greeks didn’t engage in any longer.  Perhaps, though I think there is a deeper connection in being child-like for both playing and learning. Sure, the vast majority of our formal education and “play” is in our youth, but there are aspects where the word play can be used for hunting, dancing, or what we would otherwise call “sport” and which both Greek and modern US Americans can admit are at their peak when performed by adults. Andrew Kern’s latest Ask Andrew podcast (hosted at CiRCE Institute) has a bit to say on this with respect to studying mythology. I must get back to playing and studying, so, until next time!