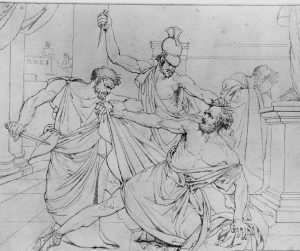 Timophanes – Timoleon’s brother and the first tyrant we meet in this story. His name, rather fittingly, means “seems honorable.”

Dionysius II – The tyrant whom Dion overthrew, but did not execute. He returns to power after Dion’s death only to be replaced by Hicetas. His story grows more complex than it had been in Dion’s life. He becomes the tyrant we pity the most, while the other tyrants in this Life receive ends they deserve. Dionysius comes closest to redemption.

Hicetas – The tyrant who replaces Dionysius II, who had allied with the Carthaginians to gain power. Starting out allied with the Corinthians, he becomes Timoleon’s main enemy in the fight to free Syracuse.

Mago – Carthaginian general allied with Hicetas and leading a formidable navy. He’s the first Carthaginian general to “capture” Syracuse, though it’s Hicetas who hands the city over. Though he acts like a mercenary and cuts when times grow difficult, the Carthaginians don’t respond well to his cowardice and redouble their efforts against Syracuse. A life-within-a-life perspective that tells us a lot not just about the man, but about why Plutarch may still consider the Carthaginians barbarians.

Mamercus – Tyrant of Catana and ally of Hicetas. Allied with Carthage but losing to Timoleon, his end is also telling about the nature of a tyrant when pitted against a democracy to beg for his life.

Plato – Though dead by the time Timoleon comes to power, he haunts this dialogue both in its analysis of tyranny and its understanding of justice.

Syracuse – The most powerful polis on the western side of the island. It had grown significantly in the last century and now had five sections, the most important for this life are the Achradina and the Epipolae. See the map below:

Leontini – A polis founded by Naxos in the 8th-century just twenty miles north of Syracuse. Often dominated by Syracuse in this period, they had acted as a reliable ally against the Syracusans for anyone wanting a home base from which to attack the tyrants (cf. Life of Dion).

Tauromenium – Another small polis at the foot of Mt. Aetna on the western coast of Sicily, but further north than Catana, Tauromenium gives immediate aid to Timoleon and, after he sneaks past the Carthaginian fleet, becomes his main base of operations in his early Sicilian campaign.

Catana – On the slopes of Mt. Aetna, Catana was also a colony of Naxos. Their rich volcanic soil made them a prime target for the more powerful poleis around them, like Syracuse. Conquered by Dionysius I, the polis remains under Syracusan sway until it switches to Roman rule in the 3rd century BC. Though greatly damaged by earthquakes, its Roman amphitheater is still used by the modern city.

Messana – Situated on the straits between Sicily and Italy (the straits of Messina, its modern name), it was originally founded under the name Zancle (meaning sharp corner), emphasizing its position at the corner of the island. Strategically important but not politically dominant, its neighbor city across the straits, Rhegium, was usually the politically dominant power. This site would later also be the spark that ignited the First Punic War between Carthage and Rome.

Peloponnesus – The main body of the Greek mainland west and south of the Isthmus of Corinth. Generally, Sparta considers it her back yard, but Argos and Corinth are the next most powerful cities with a claim to this space.

Corinth – The prosperous mother-city (μητροπολις – metropolis) of Syracuse with a vast trading network all over the Mediterranean. Keeping Syracuse safe and prosperous remained in Corinth’s best interests and so her people send Timoleon to lead that mission against tyrants and Carthaginians.

Delphi – The pan-Hellenic oracle and most important site for advice and perspective from the gods. Plutarch served at this temple for the majority of his adult life. It plays a small role in that some men whom Timoleon ends up losing likely deserved their fate since they had captured and sacked the sanctuary at Delphi earlier in their military careers. Plutarch sees such sacrilege repaid by Divine Justice.

Elsewhere in the Aegean

Italy – Too close to Sicily to be ignored, Italy contained many cities that would either be sympathetic to democracies or willing to house tyrants, at least temporarily.

Rhegium – Right across the straits from Sicily, Rhegium acts as a neutral meeting ground for negotiations. A cross-roads city that always has representatives milling about from Corinth, Carthage, and Syracuse.

Bruttium – The region around Rhegium, loosely corresponding to modern Calabria.

Justice (δίκη – dikē) – Plutarch argues (30.9) that Justice preserved Timoleon’s good fortune. With this in mind, it’s helpful to remember that Dion didn’t have the same good fortune, though he seems to have deserved it. Perhaps he stepped off the road of Justice and Plutarch allows us to decide where and when. Timoleon also puts justice and honor over convenience (5.1), his brother acts without justice (4.5) when he becomes tyrant, and Timoleon not only acts justly (5.1; 10.7; 29.6), but physically restores the courts of justice (22.3) to the democracy of Syracuse that before had to rely on the whims of the tyrant.

Gentleness (πραότης – praotēs) – Though not mentioned often, it’s important for us to remember that this is a virtue listed explicitly in Aristotle’s Ethics and one that Plutarch takes great interest in for his characters. Timoleon is introduced to us as gentle (3.4), but not with tyrants and base men. We’re also told at the end that he dealt gently and justly with friends (37.5), but boldly and powerfully against barbarians (i.e. Carthaginians in this case). See Plutarch’s “On the Moderation of Anger” or Aristotle’s Ethics Book 4, Ch. 5 (1125b35) for a more thorough discussion of this virtue and its most obvious excess: anger.

Fortitude (ἀνδρεία – andreia) – Several times it seems like Timoleon should give up after a major setback, but he doesn’t. This virtue isn’t just for tyrants, as Dionysius I had argued with Plato in the Life of Dion.

Wisdom (φρονήσις – phronēsis) – Especially on the heels of Dion’s life, Timoleon just strikes us as lucky. Yet, Plutarch primes us in the preface (0.8) to read with an eye for his wise choices and not to judge every decision by its (usually positive) outcome. Plato’s wisdom even helps men like Dionysius (15.4)

Should we prioritize our homeland over our family? If so, is it virtuous to go as far as Timoleon does: consenting to and helping plan the assassination of a brother?

What is the attraction of being a tyrant? How does Plutarch agree with Plato that a tyrant’s life is the worst kind?

C. 4 – Backstory on Timoleon and Timophanes

C. 5 – The Aftermath of Fratricide

6-7. Dionysius asks Aristides the Locrian for one of his daughters in marriage. Aristides (a friend of Plato’s) responds that he would rather see his daughter dead than married to a tyrant. Dionysius puts all his children to death and then asks Aristides if he’d changed his mind. He said he was afflicted/saddened by the deed but not repentant of what had been said.

C. 9 – Hicetas and the Carthaginians

C. 10 – Timoleon’s Trick to Get to Tauromenium

C. 14 – The Character of Dionysius

C. 24 – From Tyrants to Private Citizens