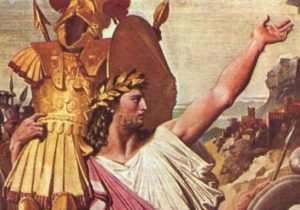 Romulus founded a city in unpromising circumstances that would later come to rule an empire on three continents unrivaled in power or prestige until the British Empire of the 19th-century. Plutarch takes us back to the beginning to understand the roots of greatness.

The story of Romulus and Remus being suckled by a wolf is not a meaningless fable. The founders of every State which has risen to eminence have drawn their nourishment and vigor from a similar wild source. It was because the children of the Empire were not suckled by the wolf that they were conquered and displaced by the children of the Northern forests who were.

Origin of the Roman Triumph

Great resources on Romulus and Remus in art, explaining and contextualizing the artwork included here as well as many more:

A helpful video on the Roman Pomerium.

The Life of Romulus: English | Greek