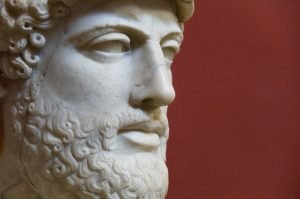 C. 2 – The Greatest Good of Virtue

C. 19 – The Exploits of Pericles in Battle

C. 21 – Restraining the Voracity of the People

C. 22 – Limits of the Athenian Empire

Three speeches of Pericles as reported in Thucydides:

Book I, sections 140-143: Pericles asserts that Athens must not give in to Spartan demands

Book II, sections 35-46: Pericles’s funeral oration praising Athens in the most famous rhetoric handed down from the ancient world.

Book II, sections 60-64: While dying of the plague himself, Pericles encourages the Athenians to stick to naval engagements and not overreach or expand their empire during this war with Sparta.