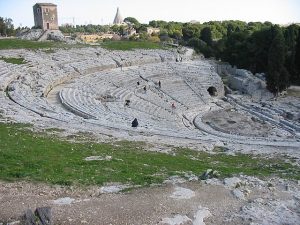 Dionysius I (the elder) – Tyrant of Syracuse taking power shortly after the Peloponnesian War and reigning until 367 BC. For some authors, he’s the textbook tyrant in the way he held on to power, the fear that prevented him from trusting almost anyone (except his nephew Dion), and his cruelty. Though Plutarch doesn’t mention it, this is the tyrant who shows up in stories like Damon and Pythias or The Sword of Damocles. Dionysius is called D-Prime in this podcast so that we don’t confused him with his son, D-II, or nephew, Dion.

Dionysius II (the younger) – Less accomplished and intelligent than his father, Dionysius does manage to rule Syracuse not once, but twice. We’ll see his comeback in Timoleon’s story but in this biography we’ll see him attempt to go from neglected son of a tyrant to philosopher-king. It doesn’t work out well. He’ll be called D-2 in the podcast to distinguish him from his father and uncle.

Dion – The main character of our tale and one of Plato’s best and brightest students. When he fails to convert either the elder or younger tyrant to philosophy, he finds himself exiled, stripped of most of his wealth, and finally discovers his wife has been ordered by the tyrant to marry another man. This means war and Dion takes it to Syracuse. Can he become the next philosopher-king? Will he instead train up a virtuous democracy to overthrow fifty years of tyranny? Tune in to find out!

Plato – Yep. Plato was a real person who had a real life outside of his dialogues (in which he never makes himself a character). You’ll want to check out Plato’s Seventh Letter for another perspective on the events in this Life. If you haven’t read this life, though, Plato’s Seventh Letter will be a great deal more obscure.

Philistus – An accomplished military mind banished by D-Prime but recalled by D-2, Philistus had taken up his pen in exile and written as a historian. As a political enemy and counterweight to Plato’s influence on D-2, Plutarch has a lot of reason to hate this man.

Heracleides – The perfidious but fun-loving rival as Dion tries to tame the tyrannical democracy. Heracleides would rather feed the beast and the tensions certainly mount as Dion fights not one tyrant, but two.

Callippus – This perfidious Athenian doesn’t seem important until the end… and then he’s fatally important.

Corinth – Mother city (metropolis, μητρόπολις) of Syracuse and prosperous city on the Peloponnesus.

Courage (ἀνδρεία – manliness, courage) – Dionysius I and Plato have a fight about what virtue consists in. Plato concedes that andreia is important but then proves publicly that tyrants are the least manly men.

Outline of Plutarch’s Biography of Dion

C. 1 – A Corinthian? A Teacher’s Influence

C. 36 – Plutarch’s Excursus on His Sources

C. 47 – Dion’s Virtue Toward Those Who Had Wronged Him

C. 58 – The End for Callippus but Not for Syracuse