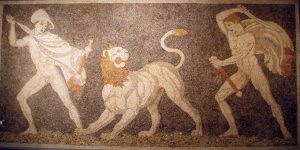 3-5. And he refuses to eat richer and richer food, saying his tutor Lycurgus had taught him to appreciate a night march for breakfast and a light breakfast for supper.

C. 24 – Siege of Tyre and an Arabian Adventure

C. 26 – The Foundations of Alexandria

C. 30 – As Gentle After Victory as He Is Terrible in Battle

C. 34 – Connecting This Victory to the Glorious Greek Past

C. 35 – Babylonia and Environs (The Nature of Fire)

C. 38 – Torching the Palace at Persepolis

C. 39 – The Generosity of Alexander

C. 40 – The Extravagance of Alexander’s Friends

C. 41 – Alexander’s Care for His Friends

C. 49 – The Demise of Philotas and Parmenio