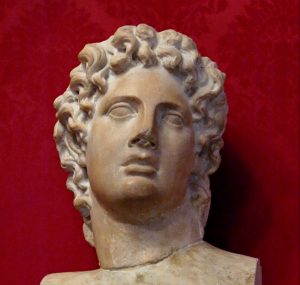 Alcibiades fought and strategized for Athens, Sparta, Persia, Athens (again), and Thrace, proving that he fought the entire time only for himself. Was it vanity or pride? Enjoy the first truly negative portrayal Plutarch tries to give, though Plutarch in all his humanity can still defend Alcibiades from his most malicious detractors.

Deceleia (23.2) – A mountain citadel of Attica, about 14 miles from Athens towards Boeotia, commanding the Athenian plain and the shortest routes to Euboea and Boeotia, occupied by the Spartans in 413 B.C. at Alcibiades’s advice!

Samos (25) – Island in the east-central Aegean originally conquered by Pericles but serving as a strategic base for the Athenian navy during the Peloponnesian Wars. When an oligarchic revolution occurs in Athens, Samos becomes the base-in-exile of the democratic faction, which Alcibiades leads triumphantly home.

C. 6 – The Influence of Socrates

C. 27 – Restoration of Democracy and Alcibiades

C. 28 – Escape and Victory over Sparta

A New English Translation of the Symposium (free online)