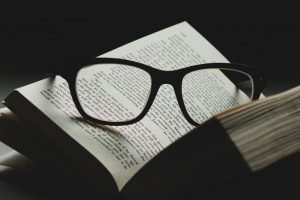 I have almost finished reading all of the “Dryden” translation of Plutarch’s Lives, reworked by Clough in the 19th-century, in a ponderous hardcover tome from the Modern Library. I wanted one book because it would provide one place for all my wacky marginalia—profound insights, underlinings, and commentary, to be sure. In working through this translation, I stumbled across quite a few words that were so obscure that I couldn’t figure them out by analyzing Latin and Greek roots, nor by examining the context of the sentence.

Sometimes, when I looked them up I laughed out loud at how obscure the word now is. I share them for my fellow word-nerds to enjoy. First the obscurest words.

This one might have been less obscure if I were from the UK, but I’m not, so I had no idea what it was and it’s used sixteen times in this translation. It means to campaign for public office. Not content, there, though, I had to seek out the etymology. It’s a combination of the Anglo-Saxon words for house and thing, the Anglo-Saxon word for an assembly of people. The online Etymology Dictionary finishes it off with:

sense of “temporary platform for political speeches” developed by 1719, apparently from London’s Court of Hustings, presided over by the Lord Mayor, which was held on a platform in the Guildhall. This sense then broadened by mid-19c. to “the election process generally.”

So, next time someone starts canvassing you for your vote, running for office, or seeking re-election, remember that we’re off to the hustings!

From the Life of Cato the Elder, the word means pretentious bragging. Its roots reach deep into Italian epics no one reads anymore. Ariosto’s Orlando Furioso has a character named Rodomonte, whose name means “he who rolls away mountains.” Apparently, Rodomonte swells with braggadocio throughout the poem, and the English language likewise now contains not one, but two Italian words for prideful boasting.

Fun fact uncovered in the research for this word: Orlando Furioso is one of the longest poems in European Literature (48,000 lines of poetry, or four times the length of Dante’s Divine Comedy or Homer’s Iliad). It’s sadly not on my short list of what I’ll read next, but I’m glad this word put it on my radar. While Plutarch has characters of impressive virtues and repugnant vices, this word allows you both to describe prideful boasting while engaging in it yourself with your wordchoice.

To purify with an offering or ceremonial method. This word comes straight from the Latin, lustrō, which was what a Roman priest did when describing the boundary of a certain ritual or even the boundary of a new city. One such sacred boundary, demarcated by a lustration, was the pomerium, separating any city from the outside world. While we just mark the city-limits, the pomerium separated civic duties from military ones. David Macaulay’s pen-and-ink reconstruction of a Roman City illustrates the importance of the sacred boundary of a city well in the first few pages. What was inside his lustration was sacred (sacer), set aside for a specific purpose. I could do a whole post on lustration, so I probably will. Ultimately, the verb came to be used in poetry as another word for “go,” so when you see it in Vergil, it’s a metrically appropriate way of saying “he went.”

penetralia – used to describe the inner sanctum of a Greek temple

contumelious – insulting or humiliating display of contempt; not to be confused with contumacious, which implies disobedience as well as disrespect or humiliation. Weird. Didn’t know that till just now.

weltering – here used a verb to mean “rolling back and forth.” It always sounds so much like sweltering that I think of heat. So, I remind myself that it can be used as a noun, and a welter is a jumbled heap of things (a farrago, perhaps?).

indefatigable – Anyone who has read the Hornblower series knows this word because it’s the name of a ship! To be unable to be fatigued helped those serving in the British Navy against Napoleon. Just ask Horatio Hornblower in the C.S. Forester novels.

interjacent – intervening, intermediate (think A B A B A B and notice the interjacent B’s)

ambuscade – an ambush, or its location

moiety – majority; indefinite portion, but a big one.

And for just poorly chosen, we have:

That isn’t to say I didn’t like all the obscure or fabricated words. I’ve never seen bastardy in print before, but it captured well in one word our uncertainty about Charilaus’s parents. Likewise, kinglets in the Life of Agesilaus adds a contemptuous diminutive that prevents us from taking these particular kings too seriously.

In the end, I’m grateful that we have Plutarch in English, and that we even have English options. Nonetheless, I can bring one heavyweight of English prose to this debate. Twain didn’t just quibble with some of the words in Dryden’s translation, he dismissed the whole thing on the cover page. See below:

The link to Mark Twain’s Marginalia for Plutarch

Happy reading! Whichever translation you choose. In case you missed it, check out my translation recommendations or my initial podcast.