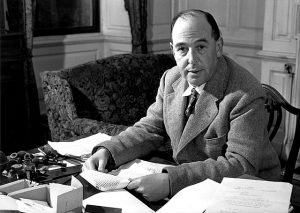 The parents of C.S. Lewis inflicted their son with the first name Clives, and he almost deserved it. Not surprisingly, he went by the nickname Jack, and is considered by some to be the greatest intellectual of the 20th-century. Like him or not, he was certainly one of the most influential.

His capacious mind is well-known and well-attested; he seemed to remember everything he read. His education in the humanities was broad and deep, though he admits of plenty of shortcomings (he was ashamed, for example, that his German remained at schoolboy level).

As a Latin and Greek teacher, I’m most intrigued that his Latin and Greek were not mastered in the standard 20th-century manner. Or, to put it more accurately, he learned in that middle way between the Acquisitionists and the Analysts (for more info, see this article on Latin Learning Methods).

Jack’s first few years of Attic were likely what we’d all call standard 19th- and 20th-century practice: he took on one or two grammatical points at a time, memorized and reproduced a chart, and added some vocabulary to his quiver. What happened next, though, was what really accelerated his learning. I’ll let him tell the rest of the story (emphasis my own).

“I arrived at Gaston’s [his tutor Knock’s house] on a Saturday, and he announced that we would begin Homer on Monday. I explained that I had never read a word in any dialect but the Attic, assuming that when he knew this he would approach Homer through some preliminary lessons on the Epic language. He replied merely with a sound very frequent in his conversation which I can only spell “Huh.” I found this rather disquieting; and I woke on Monday saying to myself, “Now for Homer. Golly!” The name struck awe into my soul.

At nine o’clock we sat down in the little upstairs study which soon became so familiar to me. We opened our books at Iliad, Book I. Without a word of introduction Knock read aloud the first twenty lines or so in the “new” pronunciation, which I had never heard before. Like Smewgy [an earlier Greek tutor], he was a chanter; less mellow in voice, yet full gutturals and rolling r’s and more varied vowels seemed to suit the Bronze Age epic as well as Smewgy’s honey tongue suited Horace….

I love doing this with my English-speaking students. The Iliad is the foundation of Western Literature. Thus, we don’t need to know anything before we dive in! I just jump in and start learning from Homer himself. This also reminds me of Lewis’s lament in another work, his preface to St. Athanasius’s On the Incarnation. In there, he laughed at how many of his students would read a 500-page, 20th-century non-fiction tome on Plato before they’d pull down The Symposium from the shelf and read it in an hour. I am not a teacher because I have in any way mastered these authors. Rather, I teach to introduce a new generation to these men: the greatest teachers the West has known.

The same, of course, applies in Greek. Don’t talk endlessly about Latin and Greek grammar—or even Latin and Greek authors. Just read them! They’re our real teachers and we want access to them as quickly as possible.

He [Knock] then translated, with a few, a very few explanations, about a hundred lines. I had never seen a classical author taken in such large gulps before. When he had finished he handed me over Crusius’ Lexicon [we’d now likely use Cunliffe] and, having told me to go through again as much as I could of what he had done, left the room. It seems an odd method of teaching, but it worked.

At first I could travel only a very short way along the trail he had blazed, but every day I could travel further. Presently I could travel the whole way. Then I could go a line or two beyond the furthest North. Then it became something of a game to see how far beyond. He appeared at this stage to value speed more than absolute accuracy. The great gain was that I very soon became able to understand a great deal without (even mentally) translating it; I was beginning to think in Greek.

That is the real Rubicon to cross in learning any language. Those in whom the Greek word lives only while they are hunting for it in the lexicon, and who then substitute the English word for it, are not reading Greek at all; they are only solving a puzzle. The very formula, “Naus means a ship,” is wrong. Naus and ship both mean a thing, they do not mean one another. Behind Naus, and behind navis or naca, we want to have a picture of a dark, slender mass with sail or oars, climbing the ridges, with no officious English word intruding.”

That’s it! That’s what I want to give my students as soon as possible. But more than that, I want to be sure that this ability is included in the ends of learning Latin. Not just meta-linguistic knowledge—not greater precision and facility with your mother tongue—not just an introduction to Greek or Roman thought and culture. I want my students to experience the language, at times, without an intermediary. To smell the sea and feel the sway of the ocean, carried along by Homer’s lines. To feel the meter and the meaning form themselves together, the sound echoing the sense and language living on their tongue, more than 2000 years after it was first performed.

One illustration usually suffices to prove this to people. In The Iliad, much action occurs for characters “along the whispering surfline” (Lombardo’s translation) but in Greek you hear the surf crashing on the sand even better than in this translation, which attempts to capture the s’s and f’s of crashing waves and the w’s and p’s of blowing winds. In Homer, this partial line runs:

Do you hear the crashing and blowing? Imagine how much more you could feel and hear if you gulped down the Greek instead of translating 5-15 lines per class?

This gulping also allows for the perspective we take in our English Literature classes. Imagine going as slowly through Dickens as we do through Caesar? How frustrating! By the end of one sentence you’d realize that he’d just begun to describe the political atmosphere of pre-Revolutionary France. You’d have several weeks of class periods like that just to get through Chapter 1 of Tale of Two Cities.

Jack wasn’t just lucky enough to do this with Homer, he continued through the Greek tradition. He read about 1/3 of the Iliad and all of the Odyssey, and then continued on with the 5th and 4th-century Greeks.

But Homer came first. Day after day and month after month we drove gloriously onward, tearing the whole Achilleid out of the Iliad and tossing the rest on one side, and then reading the Odyssey entire, till the music of the thing and the clear, bitter brightness that lives in almost every formula had become part of me….The wanderings mean as much as ever they did; the great moment of “eucatastrophe” (as Professor Tolkien would call it) when Odysseus strips off his rags and bends the bow, means more.

If you’d like to try something similar this summer, I’m tempted to try an experiment. Though I don’t have either Knock or Jack’s chops, I at least have the ambition to re-create what they tried. Would anyone be willing to join me in a quest to read as much Homer as possible in a once or twice weekly meeting and see how far we can go by gulping? Let me know in the comments, via email (tom@grammaticus.co), or using the Contact form.